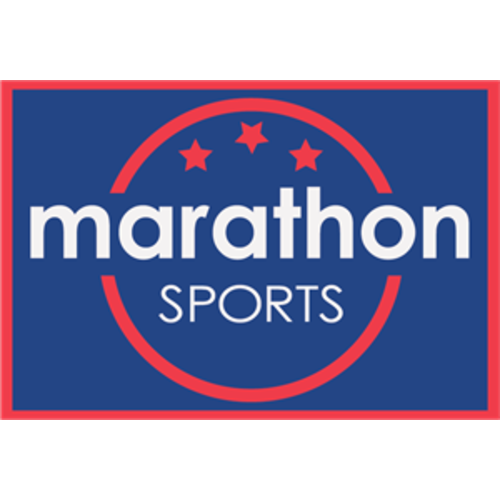 Marathon Sports is an Ecuadorian sporting goods manufacturing company founded by Rodrigo Ribadeneira in May 1981, when the brand opened its first store. The company, headquartered in Quito, manufacture and distributes athletic sportswear to sports teams and athletes, mainly association football uniforms.

In addition to its own products, Marathon imports, distributes and markets some of the most important global brands of clothing and accessories, such as Adidas, Nike, Puma, Diadora, Wilson and Joma. There are currently 88 stores in Ecuador.

The company was founded in May 1981 by Rodrigo Rivadeneira. It first started as a sporting store chain for Ecuador, but in 1994, the Reebok contract with Ecuador national football team expired. Marathon Sports then signed a contract with the Ecuadorian Football Federation for an unknown number of years, although it was renewed in 2016 for a total of US$ 2,6 million, expiring in 2023. The first national squad jersey design had a band of thick blue and red strips on the right shoulder reflecting the flag of Ecuador. After being close to qualify for their very first FIFA World Cup in 1998, the Ecuadorian Federation decided to stick with the brand, releasing a design reflecting more of an Andean style.

In 2002 the Ecuadorian team qualified for its very first World Cup, held in Korea and Japan –the first FIFA's jointly hosted World Cup. Marathon Sports consolidated as an international brand, having sponsored not only football teams in Ecuador but in Peru (Deportivo Municipal and Uruguay (Rampla Juniors). Moreover, Marathon Sports opened stores in Lima (Peru).

In 2017, the company signed a contract with the PFP to become official shirt supplier of Peru national team since 2018 for a total of USD 1,5 million –plus 8 million in sporting goods. The offer largely overcome Adidas', which had also showed interest in the Peruvian team.