Nottingham Forest is an English football club. The club was founded in 1865, making it one of the oldest surviving football clubs in the world (but younger than city rivals and arch-rival Notts County). The club plays in red shirts and white shorts. When Arsenal was founded, Forest made shirts available, which is why Arsenal still play in red shirts. The two stars above the Nottingham Forest logo symbolize the two European Cup I won in 1979 and 1980.

Nottingham played 56 seasons in the Premier League (or its predecessor First Division), the last time being in 1999, winning the national championship once and winning the European Cup I twice, which is unique. This makes it one of the two clubs (along with Hamburger SV) that once or several times won the European Cup I and will no longer play at the highest national level in the 2019/20 season. 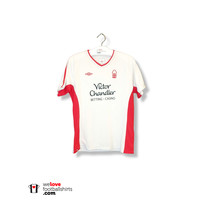