The 2012 African Cup of Nations was the 28th edition of the Africa Cup, the African Championship of the CAF. It was jointly hosted by Gabon and Equatorial Guinea. The two countries were assigned the organization over Nigeria, Angola and Libya. The tournament was held from January 21, 2012 to February 12, 2012. The winner was Zambia, which won against Ivory Coast in the final after penalties.

The main absentee from the tournament was defending champion Egypt, they even finished last in their qualifying group. 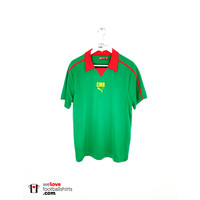