This shirt was worn in the qualifying series for the 1998 World Championship in France. Number #2 in the selection was Michael Reiziger.

Michael John Reiziger(Amstelveen, May 3, 1973) is a Surinamese-Dutch football coach and former professional football player. He played mainly as a right back, but was also used as a central defender or left back.

In his early years, Reiziger played as a right winger and right half, but was retrained as a defender at the request of trainer Louis van Gaal around 1994. He had his greatest sporting successes at Ajax in the mid-90s and in his early years at FC Barcelona. He also played 72 times for the Dutch national team, including four final tournaments. He stopped playing football after the 2006/2007 season. From August 2008 he trained as a Professional Football Coach. He was a match interim trainer of Ajax at the end of 2017, after the previous resignation of Marcel Keizer. 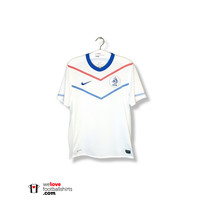