Feyenoord won the national championship fifteen times, the KNVB Cup thirteen times, the European Cup I once, the UEFA Cup twice and the World Cup once. Partly because Feyenoord is the first (and to date the last) Dutch club to win a major international prize, it has historically played a prominent role in Dutch football. In the UEFA ranking of best clubs in Europe, Feyenoord was in eightieth place in the 2021/22 season on September 22, 2021 with a total of 17,000 points. 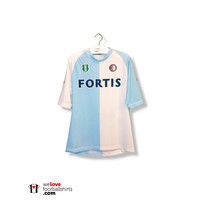